Case 12 is a 56-year-old college-educated professional football player who played for more than 10 years and sustained 20-30 concussions; 3 with frank loss of consciousness.  He suffered from chronic headaches, multifocal joint pain, an inability to follow conversations and was dependent on his wife for basic ADL’s. Other symptoms include severe sleep disturbance, anhedonia and loss of appetite.  Of particular note was a tendency to social avoidance related to shame over slowness of movement, word-finding difficulties and poor memory.

Orientation:
A score of 10 out of 12 falls within the low end of the average range and raises the question of either mild confusion or mild memory impairment. This patient should be followed with serial evaluations.
Attention:
A score of 4 out of 8 indicates significantly impaired attention. The patient may be in a confusional state or delirium. Problems with attention can be caused by one or more of the factors listed on page one of the Cognistat test booklet. It is important to rule out possible medication side effects. Care should be taken in interpreting low scores in other ability areas when attention is impaired.
Language:
These Language scores fall within the average range.
Constructions:
A score of 3 out of 6 indicates mild spatial construction disability. Spatial-construction ability varies widely in the normal population. This patient should be questioned closely about a possible longstanding weakness in this area. In the absence of a pre-existing spatial-constructional weakness, this score indicates mild impairment.
Memory:
A score of 7 out of 12 indicates significant memory impairment. It is important to rule out treatable causes of memory problems and/or more general cognitive decline. This patient needs to be further evaluated both medically and cognitively.
Summary:
This patient has specific areas of impairment: Attention, Constructions, Memory, Similarities, Judgement.
MCI Index:
The MCI Index is 4, which raise the question of a Mixed Dementia Syndrome and is likely to impact occupational and social functioning. This patient should be further evaluated for treatable causes of cognitive decline. 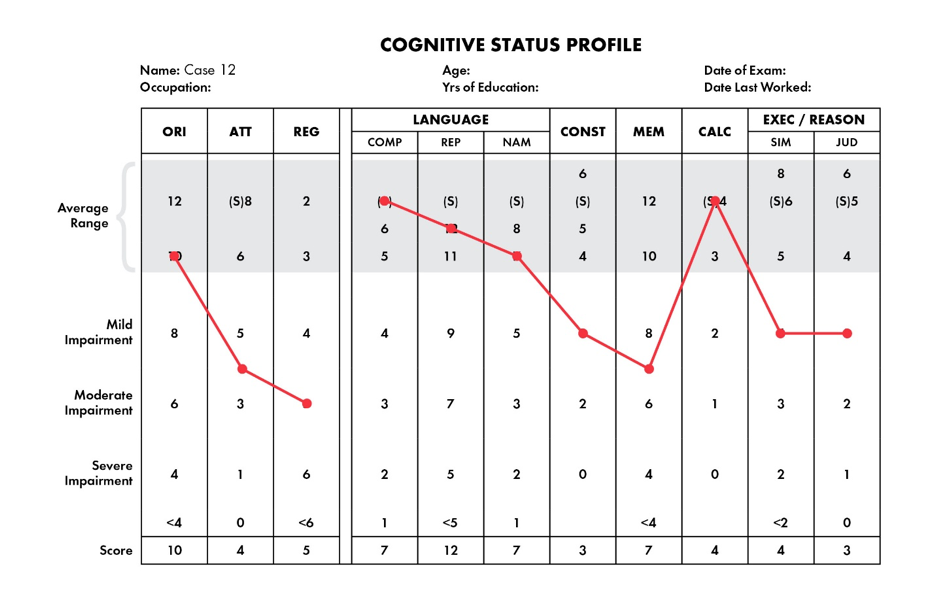